Maker's Mark® began with one family's quest to create a bourbon they enjoyed drinking and sharing with friends. That's hardly revolutionary today, but in 1953 it changed an industry.

Bill Samuels, Sr.'s quest to create Maker's Mark® began with his only copy of the family's trusted, 170-year-old recipe. The one the sixth-generation distiller promptly set on fire, of course.

After accidentally burning a set of drapes in the process, Bill experimented with different flavoring grains, searching for a mash bill all his own. To save years of aging time, Bill baked several loaves of bread with various grain combinations instead of distilling them. His quick thinking not only saved time but also led him to swap out the traditional rye grain that is commonly used in bourbons, for soft, red winter wheat. This replaced the hot bite of rye with the delicate sweetness that Maker's® is known for today.

Give me a bourbon that won't blow my ears off.

Through ingenuity, patience and a determined taste vision, Bill not only reinvented the family whisky, he and his collaborator – Margie – also revolutionized an industry. 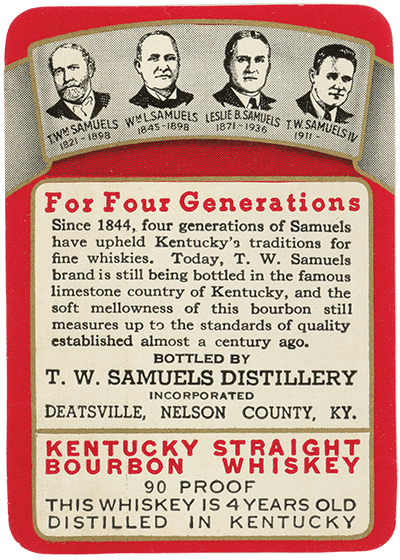 The flavor of Maker's Mark stood out from the crowd, so co-founder Margie Samuels wanted to ensure the bottle did the same on store shelves. It’s said that Margie is the reason most folks buy their first bottle of Maker's Mark and Bill is the reason they buy their second. The shape of the bottle, look of the label, signature red wax topper and even the name itself are all thanks to Margie.

The Kentucky Bourbon Hall of Famer (the first woman involved with a distillery to be inducted, by the way) hand-dipped the first bottles in her kitchen using a home fryer to melt the wax. Margie's fried chicken was never quite the same, and neither was the whisky business. While every sip of Maker's® tastes just like the one before it, no two bottles are exactly alike. Those red tendrils give each bottle its own unique flourish.

My aim was to bring good taste to tastes good.

When naming this new bourbon, Margie was inspired by the "maker's marks" that pewter whitesmiths put on their best work. Her mark features a star for Star Hill Farm, the Bardstown farm where the family resided.

Margie was much more than a homemaker, but she sure knew how to make distillery visitors feel at home. Some even credit her with inventing bourbon tourism. Margie ensured the distillery would receive the same attention to detail as the whisky, from its picturesque landscape to its distinctive red shutters. Margie even made Bill, Sr., agree that for every dollar that went into the bourbon, another would go into restoring the distillery's buildings and grounds.

If character came in a bottle, it might look something like this one. Margie's signature red wax topper isn't the only feature that helps Maker's Mark stand out from the crowd. The shape of the bottle, look of the label and even the name itself are all thanks to Margie the marketer. That square shape was inspired by Margie's collection of 19th-century cognac bottles – as was the wax that typically sealed them.

Bill, Jr., did whatever it took. He'd wear a dress, impersonate Elvis or sing with Little Richard if it promoted Maker's Mark.

When the son of Bill and Margie took over as president in 1975, his father's only words of advice to Bill Samuels, Jr., were "Don't screw up the whisky." Bill, Jr., has honored that wish while displaying a flair for innovation – just like his parents. He created a first-of-its-kind Ambassador program that allows Maker's Mark's biggest fans to feel like part of the family. And, like his father, Bill, Jr., made his mark on the family legacy and the bourbon category itself in 2010 with Maker's Mark 46™, the brand's first new major product in over 50 years.

Creating Maker's Mark 46 was trickier than working on the damn Polaris missile.

As Chief Distillery Officer, Rob’s focus is on growing the distillery to meet the world’s increased demand while ensuring every drop of Maker’s® is made the same way as the first.

The passing of the wax Rob Samuels.

Since the ripe, old age of nine, the grandson of Bill, Sr., and Margie has worked at virtually every position in the distillery. Today, Rob is in charge of not "screwing up the whisky" – as his grandfather so elegantly put it. This means honoring that patiently handmade, high-quality ethos of his forbearers while figuring out how to make more Maker's Mark for the world. And, of course, there's the Maker's Mark Private Select® program which leaves many eager to see what new inspirations lie ahead.

See the distillery for yourself.

There's a reason so many generations of the Samuels family drew inspiration from this place. We'd love to show you the special reasons why.